Shooting from 20 metres, Thompson launched into the shot and for once Archbold was caught flat footed.

Bolch said he was delighted with performances across the park.

“Clarkey was an X-factor again up in the front third,” he said.

“Great work by Ready for the second goal after great lead up work by Clarkey.

“We’re starting to get full strength back now. You look at the bench today, we had Matt Thompson, Alex Read, Tommy Duggan. I thought the balance of the side was a lot better today.”

Bolch said Jimmy Thompson’s hard work was now being rewarded in front of goal. “We’ve told Jimmy we expect a goal a game now after last week and now this week,” he said.

“Confidence is such a huge thing, he scored that goal last week and did really well for his goal today. There were a couple of lucky bounces back to him but he just wanted it and a composed finish as well. He has been in those position a couple of times this year but rushed it or blasted it into the keeper. He took his time to draw the keeper to one side and put it in the opposite corner it was a great finish.” Bolch said he was equally pleased with a clean sheet as the three goals.

“It was something we spoke about before the game,” he said.

“Zach Thomas was brilliant again across the backline. Cowby (Nick Cowburn) was better with another run under his belt and Thommo (Matt Thompson) got 25- 30 minutes at the end and scored a very good goal.” 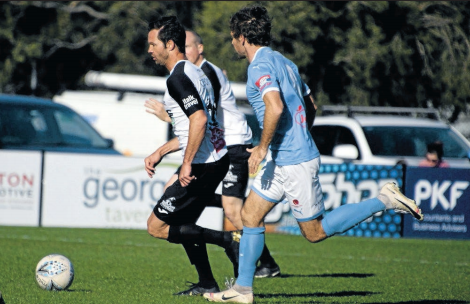