THE Magpies will learn on Saturday if they can replace the Eagles as the highest flying bird in Hunter football.

The battle between the fourth-placed Maitland and top of the table Edgeworth could well decide the minor premiership for season 2019 and grand final favouritism.

“If we beat them we go two points behind with three games in hand and if they beat us they skip eight points clear of us,” Bolch said.

“It’s a massive game.”(Damian) Zane is a great coach he will have them set up for us, he would have been watching our last couple of games.
“This will be the biggest test for the boys so far.”

The Magpies go into the game against the competition leaders full of confidence after a 3-0 win against Charlestown City Blues at Cooks Square Park last Sunday.

Jimmy Thompson scored for the second successive week and Alex Read and Matt Thompson also got goals after coming on in the second half off the bench.

“I thought it was probably the best half of football we’ve had all year. The balance looked really good and it’s going back to six or seven weeks ago when you had that 13 or 14 players to select from.

“Ready and Thommo coming off the bench. We’re really getting some impact off the bench like we were when we had Pratty (Sean Pratt), Ready and Browny (Grant Brown) coming off.

“If you’ve got that depth it really helps, but it is a different beast this week. Edgy are on top of the ladder and mi- nor premiers for the past four years for very good reasons.” Maitland is a more well-rounded team this season with Joel Wood the target up front, Tommy Davis boosting the defence and former Newcastle Jets player Nick Cowburn an exciting addition to the squad over the past two weeks who is all class in the midfield.

“You look at where we were last year and we drew twice with Phoenix who ran last, we drew with Lakes, we drew with Adamstown, we lost to Weston who were down at the bottom,” Bolch said.

“We haven’t done that this year. Realistically when you break it down. We lost to Weston in the first game when we were a bit under-done and we lost to Olympic, they are the only losses of the year.

“Confidence is very good and I expect them to be really up for it on Saturday. They really work hard for each other as a group. A few of them are getting on a bit, Trotty is 34, Thommo is 37, Clarkey is late 20s, Carl Thornton is 31 so they are getting on in their career and want to win something together. The whole culture of the club is going well.”

With a defence which is returning to its best, Maitland’s favour front three of Wood, Jimmy Thompson and Clarke looms large.

“We break with a lot of speed, with them three going forward and the Swans and Cowby linking with them in attack we break really quick and it’s hard for teams to adjust to it,” Bolch said. 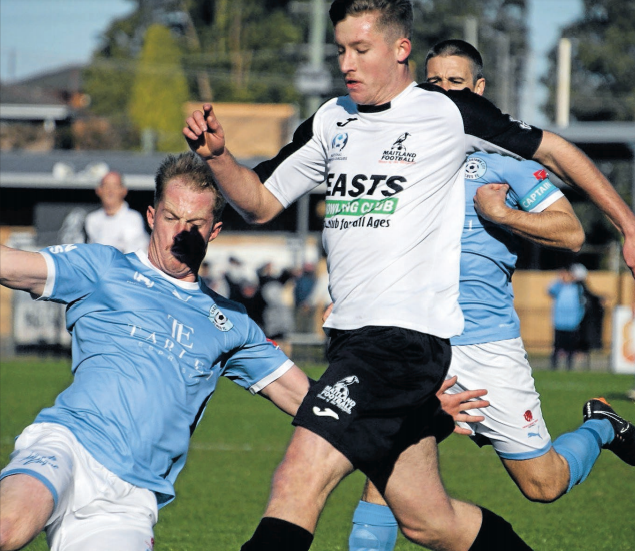