THE Maitland Magpies historic round of 32 FFA Cup tie will be held at the Maitland Sportsground on Wednesday, July 31.

The date and venue were confirmed by Northern NSW Football on Friday, but unfortunately it will not be the live telecast game on Foxtel. However, there will be live crosses to the venue during the game for updates.

Details on the cost of lighting for the venue are still to be finalised. It will cost up to $16,000 to bring in additional lighting to lift the sportsground to the required 500 lux level.

Magpies president Ray Watkins said negotiations had been positive and it was an exciting to announce that the game would be at Maitland’s new showcase sportsground.

“We have a further meeting with them during this week to continue those negotiations.

“From the reports and feedback we are getting back from the community and even the Newcastle community there is a groundswell of support for Maitland and to hold the game within the Maitland region is the only sensible option.”

Maitland are making their debut in the FFA Cup national stage this season but have been drawn against a Mariners side that have already been beaten by Member Federation clubs on two occasions in years prior.

Watkins said it was a David versus Goliath encounter but with the Maitland and wider Hunter community in their corner the Magpies were capable to pulling off the unexpected.

“Everyone is really excited about it. We’ll give it a red-hot crack and back ourselves but at the end of the day being realistic they’re an A-League side, a bunch of professional footballers, and we’re a bunch of part-timers who train once or twice a week and all have full-time jobs.
“We’re the underdogs going into it, it’s the first time we’ve been into this stage of the Cup, but I’m sure we’ll give a good account of the club and a good account of the region.”

Maitland’s round 15 clash against Lambton Jaffas at Arthur Edden Oval on Saturday afternoon has been rescheduled to be played on Wednesday, July 10. The Magpies host Broadmeadow Magic on Sunday, July 7. 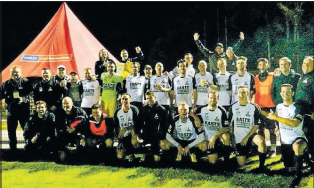