Magpies Community gets behind their Boys

CARL Thornton knows that when he walks out onto the Maitland Sportsground as skipper of the Maitland Magpies in Wednesday night’s FFA Cup tie against Central Coast Mariners he and his teammates will be bringing to fruition the dreams and hard work of everyone involved at the club.

Since joining the Magpies with his brother Liam for the 2016 season from the Weston Bears, it has become apparent that Maitland FC is more than just a football club to the the dedicated committee and hardworking volunteers. “This has become a community and a family to us and all the boys are so excited about representing every member of that family and community on Wednesday night,” he said.

“Since Bolchy (senior coach Mick Bolch) has come he has really brought the club together from the junior teams through to the 18s and 20s it is a real community club now. He has made some good additions to the squad which have strengthened the team, but I think it is that real community feel around the club at the moment which is so important. The committee members play a really big part of that They are very passionate about involving the juniors on match days and for the senior players to be getting out to watch the juniors play and getting involved in training sessions.”

Thornton said the FFA Cup was important for everyone involved at the club and he would love the community to share in the special nature of the competition with the Magpies coming up against an A-League opponent.

“It has to be rewarding for people who have been involved in the club for as long as some of the supporters and committee members have. Even past committee members who have moved aside now they worked so hard to get into the top league and now they are in the top league for the club to be doing well and be put on the national stage has to be a massive reward for the all the effort they’ve put in throughout the years.”

The Thornton brothers have blood ties with MaitLand with their uncles Brett and John Cowburn playing for the Magpies in 1980 grand final winning side.

The family connection has been further strengthened with their cousin Nick, Brett’s son, joining them at the club from the Newcastle Jets.

“It is great having his A- League experience around in the lead-up to the game,” Thornton said of Cowburn “We’ve got a pretty experienced squad. A lot of our players who have played at high levels even some boys who have played overseas as well as throughout Australia.”

“One of the main reason why Liam and myself initially came across was to play with our mates Ryan Broadley and Blake Thompson and we’ve made so many great friends since being there.

“We’ve thoroughly enjoyed our time since moving there. No regrets.” You can book your tickets at www.maitland.nsw.gov.au 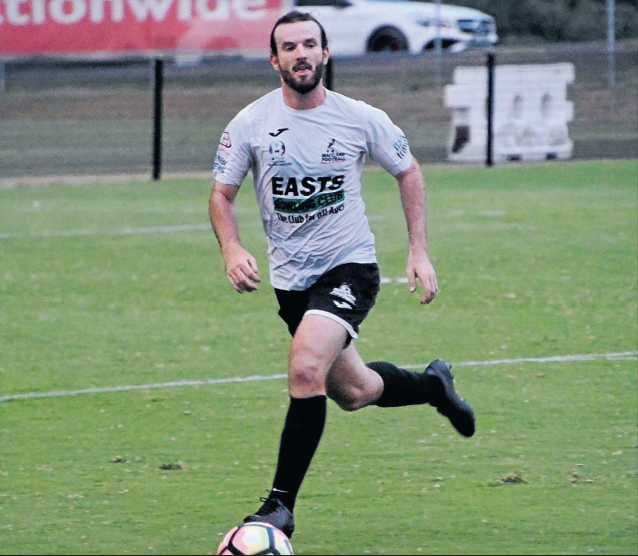