Magpies and Magic can’t be Separated

THE Maitland Magpies and Broadmeadow Magic could not be separated finishing in a 2-all draw in what was billed as potential minor premiership deciding game at Cooks Square Park on Sunday.

“We’ve still got a couple of games in hand so it was not a bad result after a pretty physical game,” Magpies assistant coach Gavin Wolfe said after the game.

After an eventful weekend of matches Edgeworth, who have played 15 games, top the table with 29 points after a 4-1 win against Hamilton after they trailed until the 73rd minute.

Magic and the Weston Bears both are on 28 points and have both played 14 games. Magic are second on goal difference from the Bears who returned to the winners circle on Saturday with a 3-1 win against Valentine Phoenix.

Maitland are fourth on 24 points, but they have two games in hand on the Bears and Magic and three games in hand on Edgeworth. “We expected to be tough and tight game with two top four teams going at each other and it was,” Wolfe said.

“There was very little space for either team to create anything.”

Mitch Oxborrow opened the scoring in the 17th minute when he was left unmarked and given a free header at goal.

But three minutes later Matt Swan equalised after being played into space by striker Joel Wood who set up Maitland’s second goal with an equally clever and unselfish assist to allow Jimmy Thompson to score in the 55th minute.

Tommy Duggan, who came on as a substitute at half-time, was instrumental in getting the ball to Wood after he forced he turn over in the midfield.

“They came at us pretty hard initially and had control of the midfield and then we started to get into the grind a little bit and got a big more control,” Wolfe said of the initial stages of the game.

“We conceded a pretty soft goal from a free header but we got back within five minutes. It was really good, it showed strong character from the guys.”

“We scored a good goal to go up and then unfortunately we nodded off and conceded later on through a good good goal to James Virgili.”

It was Virgili’s 10th goal of the season and was slammed home from 20 metres. 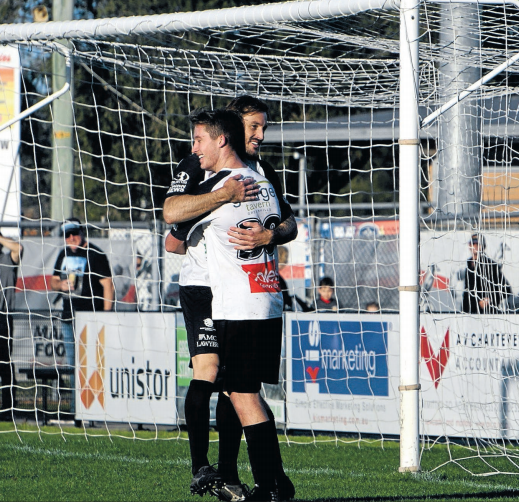