MAITLAND Magpies star Ryan Clarke admits he has found himself waking like a 10-year-old thinking about the FFA Cup Round of 32 clash against Central Coast Mariners.

“There’s a real sort of buzz around all the boys in the dressing room. We’re excited is very much an understatement,” Clarke said this week during a media call at the Maitland Sportsground.”

While he has travelled the world and has a successful real estate business career, Clarke is relishing his chance to embrace the Magic of the Cup.
“I feel like a 10-year-old waking up thinking about it,” the lightning fast winger, who has been identified as one of Maitland’s danger men by the Mariners, said.

“I think it means everything to get a big crowd along to the game. Being more of a rugby league town, it’s going to put soccer on the map with a big crowd out here. Especially for the juniors to see that it is possible to play in front of big crowds and stay here in the Hunter Valley. It is the Magic of the Cup, anything can happen on the night.”

“It gives semi-professional clubs like us the chance to play against the big boys or the professionals and have a sniff of actually winning.
“You don’t get that in other competitions where the miss-match is enormous, but here the players are still at a great level where they can compete. It’s a great testament to the game of soccer I think.”

Clarke’s life and football journey started out as an 18-year-old at the Mariners in the second year of the A- League in 2005.

“I’m still waiting for that call from Lawrie MckInna (then Mariners manager and the current Newcastle Jets CEO) about the contract,” Clarke joked this week.

After two years on the Central Coast, Clarke headed overseas.

“It didn’t happen then so I went overseas. I’ve been everywhere Italy, Romania, over to WA, then to Scotland, back to WA and then over here,” he said. “I’ve been a bit of a journeyman but it’s been a great experience.

“I love Maitland, the people, how laid-back it is and working with PRD I’m here for life really. There are worse places to be.”

Clarke said he was glad the cup tie had finally arrived.

“We’re still chasing the premiership so I think it has all worked out well for us,” he said. “The boys are competing for spots in this game, which is the biggest in Maitland’s history, but we’re all still focused on winning the premiership.” 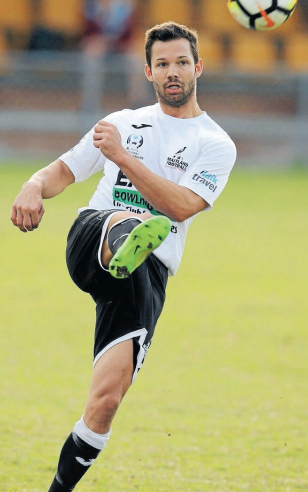